Batchworth Sea Scouts have been honoured to be recognised by the Royal Navy as one of the top 100 Sea Scout Groups in the Country since 1945.

Originally granted this ‘Royal Navy Recognised’ status for the efforts of our members in supporting the war effort during the early 1940′s, Batchworth are reassessed every 18 months to ensure we still meet the required criteria to maintain the standard. 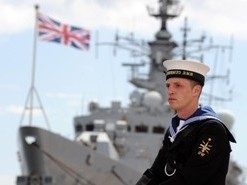 There are 450 Sea Scout Groups in the UK. Of these groups, 100 are acknowledged by the Royal Navy as offering a level of training in seamanship skills and leadership skills to the standard that they demand.

Soon after the start of the Second World War, Coast Guards were withdrawn and sent to sea to serve with the Royal and Merchant Navies. Sea Scout Groups from all over the country were requested to perform War Service Patrols. Tasks included setting up first aid posts, catering for the Home Guard and evacuees, and Coast Guard duties.

As a direct result of our Group’s work doing Coast Guard Duties the group was rewarded in 1944 by being made the 10th group in the country to be Admiralty Qualified. In 1966 the Admiralty Qualified groups were re-named as Royal Navy Recognised groups.

Royal Navy Recognised groups are inspected every 18 months to ensure they maintain the high standards required. When a member of the group has been through an Admiralty inspection they may wear the “Royal Navy Recognised” badge. The Royal Navy also provides financial assistance to its recognised groups by paying into a fund managed by the Scout Association.   Batchworth has received several grants from this fund, using the money to purchase vital water activity equipment such as sailing boats, a 5m RIB, kayaks, canoes and safety gear.

Batchworth Sea Scout Group are very proud to say that they have retained their R.N. recognition since 1944 and until her decommissioning in 2011, maintained an affiliation with the Type 22 frigate, HMS Cumberland.  Since then, links with HMS Warrior in Northwood have been established and the group looks forward to maintaining its recognition status in the future.

Recently, our Explorer Scouts had an interesting evening at a Royal Naval Reserve base, HMS President, which overlooks Tower Bridge in London. They split into teams and completed numerous challenges, including laser shooting using equipment that the reservists train on.