In 2015 tens of thousands of Scouts will converge on Kirara-hama, Japan, the venue for the 23rd World Scout Jamboree.  The Jamboree is held every four years and gives Scouts from across the world the chance to join in an exciting programme of activities.

Two lucky scouts from Batchworth have been selected to join the UK contingent.  They will join a party representing not just Batchworth, but also local scouting in Rickmansworth & Chorleywood as well as the wider Hertfordshire area.  Leading up to the expedition, both scouts will be organising a range of fundraising events and will be hoping our members support them in this process.

Attending the Jamboree really is one of those ‘once in a life time’ experiences, which scouting often seems to deliver.  Tom Smith, now an active leader at Batchworth, was an explorer and Young Leader with the beavers when he attended the World Scout Jamboree in Sweden during 2011.  Below is his report following the event:

“Nearly two years ago, I attended a selection weekend at Phasels Wood and was lucky to be chosen to represent Rickmansworth & Chorleywood District as one of about 70 Scouts from Hertfordshire attending the 22nd World Scout Jamboree in Sweden earlier this Summer.

As time passed my Unit had several camps and meetings and on 24th July we set off from South Mimms for Heathrow and our flight to Copenhagen. All the UK units met up in Copenhagen for three days and we then travelled to the Jamboree site at Rinkaby in southern Sweden.

The opening ceremony was spectacular – seeing 40,000 people all in one place was amazing, and Bear Grylls abeiled from the roof of the stage! Our Unit made balloon hats – mine made it onto the Scout Association website.

There were loads of things to do during the Jamboree, such as assault courses, outdoor games, a day-long hike, badge swapping and, of course, meeting as many new people as possible. Our days were jam-packed from dawn until dusk and we met people from every corner of the world, and shared dinner with Scouts from Germany, Sweden and The Gambia.

In the middle of Jamboree there was a cultural festival – we visited each other’s campsites and shared parts of each other’s cultures, such as food or national dress. In the evening there was another main stage event where we learnt a little about Swedish history and culture, and heard performances from a couple of Swedish bands.

No-one wanted Jamboree to end, but it went out with a bang, quite literally! The closing ceremony took place on a newly constructed square stage, with everyone sitting round in a massive circle. As the evening went on we experienced the full variety of Swedish rain from light drizzle to torrential downpour, but this didn’t dampen our spirits. We saw a Belgian pop star, heard several renditions of “The Final Countdown” from the band Europe, and had an appearance from the King of Sweden who is a lifelong Scout. He led us in the countdown to a spectacular firework display to finish the evening.

A trip to Jamboree also includes Home Hosting where you get to spend time with Scouts from another country. Many people stay with Scouts in their homes, but we travelled to Croatia to spend a few days camping with Croatian Scouts. Their campsite was on an island in a river, only accessible by RIB, and we enjoyed a more relaxed time with lots of swimming in the river.

I was proud to attend Jamboree as a representative of the UK, of Hertfordshire, of Rickmansworth & Chorleywood, and of course of Batchworth. It was a fantastic experience and I would recommend it to anyone. The next Jamboree will be in Japan in 2015 and Scouts aged between 14 and 18 at the time will be eligible to attend – I’m hoping to go as a member of the International Service Team. My sister, Judy, was on the IST in Sweden and had a fantastic time too. Many people supported me in going to Jamboree but I would particularly like to thank Batchworth Sea Scouts for your support.” 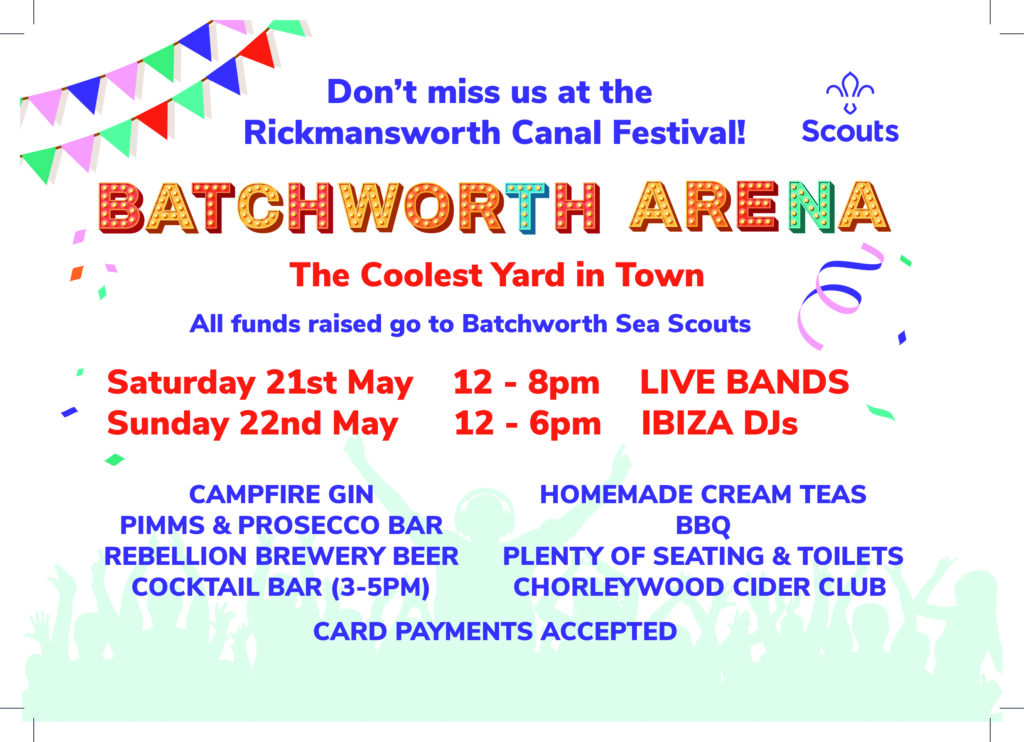